Graphene Nanoribbons (GNRs) are narrow strips of graphene. They usually consist exclusively of carbon atoms, are only a few atoms wide and only a single atom thick. In terms of their electronic properties, they are semiconductors, meaning they possess a band gap between their valence and conduction bands.

As the performance requirements of commercial semiconductor-based devices increase, today’s semiconductor materials are approaching limits regarding the degree to which they can be scaled down in size. Therefore, the development of novel semiconducting materials is important, and graphene nanoribbons are attractive alternatives.

Our research demonstrated that the electronic properties of graphene nanoribbons can be modified by exchanging some of the carbon atoms for atoms of a different element (e.g. nitrogen or boron). Using various spectroscopic techniques, we were able to show that both the valence and conduction bands shifted as we increased the number of substituted atoms, while the size of the band gap remained largely unchanged.

This strategy, called doping, gives us a knob with which we can tune the energy alignment of the valence and conduction bands. Together with other ways of modifying the structure of nanoribbons, it opens up the possibility of deliberately engineering the electronic properties of graphene nanoribbons and thus making them more versatile.

The Role of the Dopant Position

In the above example, we used nitrogen atoms to substitute carbon atoms at the edges of a nanoribbon. By changing the position of the dopant atoms to the interior of the nanoribbon (the backbone), we can change the electronic properties of the nanoribbon in a different way.

As you can see in the energy diagram shown below, backbone doping does not lead to a substantial shift of the valence and conduction band, but rather introduces a new set of bands within in the band gap, effectively reducing the size of the band gap. The position of the dopant atoms has a strong influence on the effect of the doping, which gives us another knob to turn in the engineering of the electronic properties. 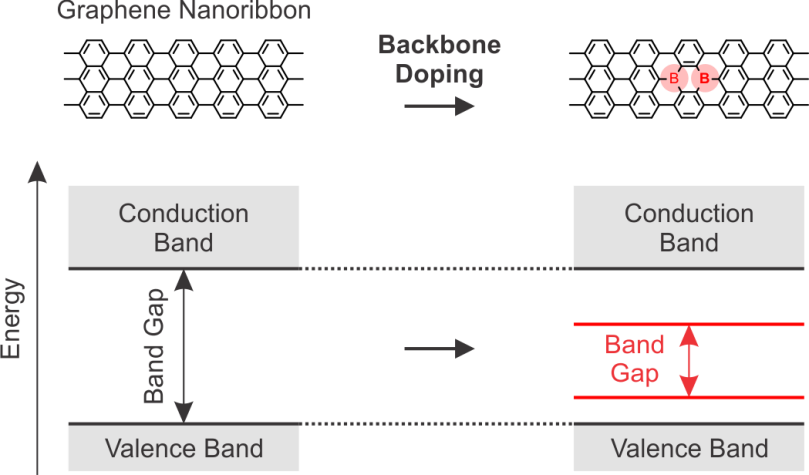 This research is published in a series of journal articles: